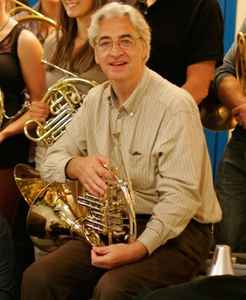 Profile:
British classical hornist, and Professor of Horn. Born ca 1956 in Glasgow, Scotland, UK.
He was a member of the Glasgow Youth Choir for nine years (age 5 to age 14). He then joined the Glasgow Schools Symphony Orchestra and, in his final two years at school, was given a place as a Junior Exhibitioner at the Royal Scottish Academy Of Music And Drama. In 1974, he moved to London to continue his studies at The Guildhall School Of Music & Drama. In 1976, he was appointed 5th horn of The Royal Philharmonic Orchestra, aged 20, while still a third year student at the GSMD. In 1979, he was appointed Principal Horn of the Royal Scottish National Orchestra. In 1985, he joined The London Symphony Orchestra. He resigned his position in 1997, after twelve years as Principal Horn. Member of the Corinthian Chamber Orchestra. He has played horn for over two hundred movie soundtracks. He was Professor of Horn at the Guildhall School of Music & Drama (1985-2012). He was Honorary Chairman of the British Horn Society from 1999 to 2005.
Sites:
prohorn.co.uk, YouTube, open.spotify.com, music.apple.com, corinthianorchestra.org.uk, gsmd.ac.uk, imdb.com
In Groups:
Festival All Star Horn Ensemble, Glasgow Youth Choir, Philharmonia Orchestra, Royal Scottish National Orchestra, The London Session Orchestra, The London Symphony Orchestra, The Royal Philharmonic Orchestra, The Symphonic Brass Of London, The Taliesin Orchestra, The White City Septet
Variations:
Viewing All | Hugh Seenan
Hugh Sennan