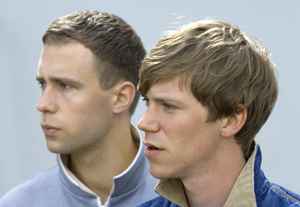 Profile:
Also called TTA was a Swedish electronic pop group from Gothenburg. The group was formed in 2001 and consisted of childhood friends Henning Fürst and Eric Berglund (both born in 1981 and originally from Onsala in Kungsbacka municipality in Halland). The Tough Alliance initially released their records on Service, but then started their own label Sincerely Yours (named after a song by The Embassy (2)). TTA split in 2009 and Eric Berglund started the solo project ceo (2).
Their concerts caused some attention due to short playing time, drunken performance and a repeated and clear use of playback.
The band's aesthetics have been strongly influenced by the Situationist International, a radical French left-wing group operating during the 1960s and 1970s. One of the group's foremost theorists, Guy Debord, is sampled at the beginning of the song "Koka-Kola Veins".
Sites:
thetoughalliance.com, Wikipedia
Members:
Eric Berglund, Henning Fürst
Variations:
Viewing All | The Tough Alliance
TTA, Tough Alliance