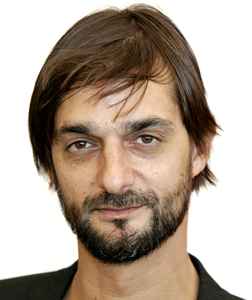 Real Name:
Ricardo Villalobos
Profile:
Villalobos was born in Santiago, Chile on 6th August 1970. At the age of three, in 1973, his family moved to Germany after General Augusto Pinochet overthrew the socialist government of Salvador Allende.

Whilst active as a DJ and musician through the mid to late 1990s, Villalobos is most recognised for his contribution to the development of microhouse and minimal techno in the early 2000s.

Someone called him "a divider of opinions" and that reflects my own internally contradictory view of him. His "Taka Taka" mix on Cocoon from 2003 blew me away and was one of the most impeccably selected mixes I've heard to this day, but for the life of me I can't imagine what anyone gets out of most of his production in the last ten years or so -- plinky-plonky, tinkly little little abstract jazzy loop things that go absolutely nowhere.

Now, let me say that after giving up years ago, I did just check out (and purchase) his "Microgestures" EP, and found it to be a very nice piece of experimental electronic music that gets a strong thumbs up from me. Intrigued, I explored a few more of his back catalog... "Detroit Heroes"... a total winner... "Silent EP"... a total winner (and almost sounding like a collaboration with Robert Hood.) "Neunachi EP"... Ummm, it's interesting... but is sounding a lot like "obscure little minimalist hipster jazz loops going nowhere" yet again.

Overall though, I would say... if you think he's "fallen off", or is producing uninteresting music, you'd be sadly mistaken, or you just don't like this style of arty minimal house. Yes, I can see why some people might consider some of it hipster twaddle, but as far as I can tell he's making some of the best music of his career in the last five years or so.

I'm not quite back on the RV train yet, but am now in the mode where I'm at least exploring his back catalog for the last decade or so and would be open to suggestions.

May 11, 2022
This producer is garbage but his hipster fanbase is even worse
See 1 reply

May 26, 2020
Revisiting his catalog today. Several releases still sound remarkable. I almost feel sorry for those who can't hear it.

December 4, 2015
there is nothing to get. if you have the time, ricardo has the vibe.

September 17, 2015
Maybe all the critics that are not impressed by ricardo should listen to the stuff between 1998 and 2007 to understand the hype about him. And should I mention that it is druggy, repetitive music that needs time? Perfect music for Afterhour-Parties, when you are far away from being sober - like him ;)

March 30, 2015
I hold my hands up and admit I simply just do not get what the fuss is all about. I find his music boring and totally lacking in content, I just feel nothing when I hear it.
On a good night he can be a fantastic DJ playing very varied sets and playing far more interesting, groovy and sexier music than he makes.
See 1 reply