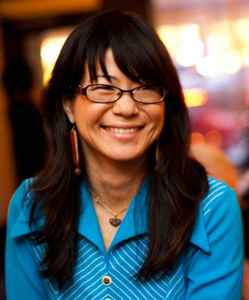 Profile:
Born in Japan, Marié Abe is a Bay Area expat accordionist and ethnomusicologist currently living in Boston. Her style cuts across diverse genres: experimental, improvisation, Balkan, indie rock, Middle Eastern, Brazilian, indie rock, tango, Ethiopian, etc. She plays in the Ethiopian groove collective Debo Band, The Japonize Elephants, Thorny Brocky, Ramon and Jessica, Guts and Buttons, and is also the founder and leader of the zany improv/Balkan bands Four Flea Circus, O Pomelo, and Chichuike. She has actively recorded and toured with various artists the world over, and enjoys exploring the intersection between improvisation and composition, integrating her interest in Mediterranean regional folk musical styles.

Since the Fall of 2011, she has been a co-producer of the NPR radio documentary “Squeezebox Stories,” which tells stories from Californian immigration history using the accordion as a common trope.

Abe is assistant professor of ethnomusicology at the College of Fine Arts at Boston University, prior to which she taught in the Department of Music and Asian Studies Program at UC Berkeley, and in the Department of Anthropology at Harvard University, where she was a postdoctoral fellow at the Reischauer Institute of Japanese Studies. She holds an MA and a PhD in Ethnomusicology from the University of California, Berkeley, and a degree in sociology, anthropology, and ethnomusicology from Swarthmore College.
Sites:
bu.edu, thejaponizeelephants.com
In Groups:
Debo Band, Japonize Elephants
Variations:
Viewing All | Marié Abe
Marie Abe, Marië Abe