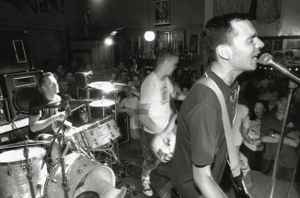 Profile:
Jawbreaker is an emo/punk rock band that was based in San Francisco, CA's Mission District (after relocating from Los Angeles in the summer of '91), although the band's members, Blake Schwarzenbach (vocals/guitar), Chris Bauermeister (bass), and Adam Pfahler (drums), actually came together at New York University in the mid 1980's. The band's first release was 1989's "Whack & Blite" 7" on their own Blackball Records. The band released 3 LPs and made appearances on different compilations for various independent labels before signing to a major label, DGC, at the end of 1994. However, their major label debut, "Dear You", failed to expand their audience and brought cries of "sell out" their punk rock fan base. This, coupled with already-present interpersonal tensions within the band that had reached the breaking point caused the band to split in 1996. Following the split, the members performed with other acts, most notably Blake's Jets To Brazil. Blake and Chris also returned to college to pursue various degrees while Adam resurrected Blackball Records to reissue much of Jawbreaker's out of print music as well as putting out records by other bands he has been involved with.

Artists and Bands I Like and Recommend by Andrew_Lawson
Bands I've Seen by Donsmad1903
Favorite Artists by dkjaer
seen live by der_jakob
“The Encyclopedia Of Punk” by crimsonmetal74
Favorite Bands by warpedmelody
Artists I Have Seen Perform by reapermadness
Artists I've Seen Live (from collection). by iEdery
Bands I've Seen Live by SWEETXPIE
The Fest by pointofc
Artists in My LP Collection by sillypenta
Nirvana related by TwinPowerForce
Cool Bands & Solo Artists by SimoniousC
Favorite Artists by Unraveling2010
My Top Ten Favorite Bands by ECR206
View More Lists →