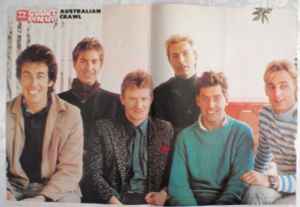 Profile:
Australian rock band formed in 1978 by a group of friends from the Victorian town of Mount Eliza, who had previously played together in the band Spiff Rouch. Australian Crawl released 7 albums before disbanding in 1986.

February 18, 2012
From their start in 1979 to their demise only five years later, Australian Crawl stood as a bizarre anomaly against the largely punk and political scene Down Under. Essentially sculpted as the Melbourne Beach Boys, the Crawl's songs ranged from odies to Errol Flynn and Resort Girls to rousing singalongs like "Hootchie Gucci Fiorucci Mama," and their mash cover of the Kingsmen's "Louie Louie." Consisting of James Reyne (lead vocals, piano), Guy McDonough (co-lead vocals, rhythm guitar), Bill McDonough (drums, percussion), Simon Binks (lead/acoustic/slide guitar), Paul Williams (bass), and Brad Robinson (rhythm guitar), the Crawl initially appeared to be little more than hedonistic surfers -- in Reyne's own words, "part of people's lives; a representation of the beach, the open air and good vibes." But their debut album, 1980's The Boys Light Up, also contained recountings of automobile accidents ("Indisposed") and vicious attacks against shallow materialists (the band's first single "Beautiful People"). Their combination of light, breezy tunes with significantly darker subtexts (not altogether unlike Brian Wilson's best material) left The Boys Light Up on the Aussie charts for no less than 104 weeks.

1981's sophomore effort, Sirocco, did not mess much with their proven formula. Alongside hits like "Lakeside," "Things Don't Seem," and "Errol," the album also produced their standard "Unpublished Critics," a Reyne rant later redone as a live track on the B-side of "Louie Louie." The follow-up, Sons of Beaches, added famed producer Mike Chapman to the mix, lending the proceedings a more polished sound, while much of the music remained the same (the hit "Shutdown" even borrowing its title from a Beach Boys classic). However, Sons also found Reyne starting to veer off into new territory, earmarked by the cryptic "Letter from Zimbabwe." Still entrenched in classic Crawl arrangements, hints began to emerge at Reyne's crucial shift in direction.

After a number one 12" EP, Semantics, the Crawl released their fourth and final studio album, Phalanx at the end of 1983. (The American version of this album, released on Geffen in 1984, bore the title Semantics, and served as more of a compilation of the Crawl's career to date.) Aside from the cover of "Louie Louie," Phalanx also contained the smash single "Reckless," a song Reyne would later redo for one of his solo ventures. Shortly before their demise, the Crawl served as opening act for Duran Duran on certain legs of the Arena tour. They would release a rare live album, Final Wave and a posthumous singles collection, Crawl File, before Reyne jaunted off on a hugely successful solo career that continues to thrive in his native Australia.

Significantly, each of the Crawl's four studio albums and their EP all reached the Top Five on the Australian pop charts, granting them a level of fever-pitch success shared by only a handful of Aussie artists before or since.