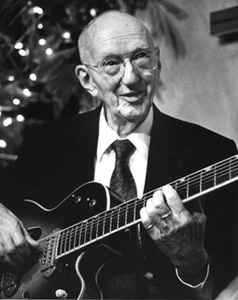 George Van Eps began playing banjo when he was eleven years old. After hearing Eddie Lang on the radio, he put down the banjo and devoted himself to guitar. By the age of thirteen, in 1926, he was performing on the radio. Through the middle of the 1930s, he played with Harry Reser, Smith Ballew, Freddy Martin, Benny Goodman, and Ray Noble.

Van Eps moved to California and spent most of his remaining career as a studio musician, playing on many commercials and movie soundtracks.

In the 1930s, he invented a model of guitar with another bass string added to the common six-string guitar. The seven-string guitar allowed him to play baselines below his chord voicing, unlike the single-string style of Charlie Christian and Django Reinhardt. He called his technique "lap piano". It anticipated the finger-picking style of country guitarists Chet Atkins and Merle Travis and inspired jazz guitarists Bucky Pizzarelli, John Pizzarelli, and Howard Alden to pick up the seven-string.

Dixieland had a following in Los Angeles during the 1940s and 1950s, and he played in groups led by Bob Crosby and Matty Matlock and appeared in the film "Pete Kelly's Blues." He famously played guitar on Frank Sinatra's classic 1955 album In the Wee Small Hours.

Van Eps played guitar into his 80s, having built a career that lasted over sixty years