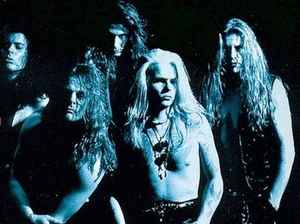 Profile:
Aces High are another classy hard rock outfit from Sweden. Similar in style to bands such as Thunder, XYZ and Nevada Beach, they released their debut album in 1994. The band features drummer Anders Johansson of Malmsteen / Holdsworth fame. In common with many similar bands from that neck of the woods, Aces High write excellent rockers and even better ballads, as demonstrated with our featured number. A band certainly worthwhile adding to the collection.Aces High were formed as Eyes in 1989 by guitarist Jake Sandberg, bassist Anders Johansson and keyboardist David Brandt. Later the same year they got in touch with Danish singer Bjørn Andersen and also changed the name of the band to Aces High, since a US band named Eyes had emerged on the music scene.The following year they acquired drummer Matts Björkman (ex-Quadruple) and in 1994 they released their first album,"Ten 'N Out" which proceeded to become very successful in Japan. Fans of melodic hard rock had to wait some years for the follow-up, though. "Pull No Punches" was released in 1998, now with Björkman replaced by Anders Johansson (ex-Yngwie Malmsteen, also in Hammerfall) on drums. This prompted the bassist with the same name to start writing his name as Anders J-sson to avoid confusion. And after another long wait, they're back again with "Forgive & Forget".