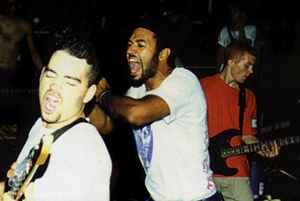 Eye For An Eye

Profile:
American hardcore band from Cambridge, Massachusetts. Eye for an Eye began in 1988 as Jason Grotrian and Ravi Dhar playing guitars, Adam Doneas on bass, Thos Niles on drums, and Lloyd Stanley singing. By mid '89 Adam was gone and Kevin Norton was in. Ravi left before the year was up and the line stabilized for the lion's share of the band. We did what we did to have some fun and because we didn't know what else to do. By the time it was over Dean Baltulonis had joined on 2nd guitar. Last show was at the 8 Ball Skate Park Somewhere, MA in the spring of 1991, but the cops shut it down before we played.
Members:
Dean Baltulonis, Dean Bartilonious, Jason Grotrian, Kevin Norton (2), Lloyd Stanley, Thos Niles