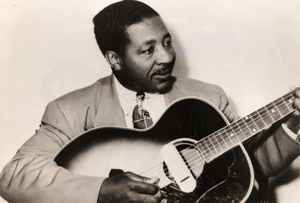 He started playing in cafes in New Orleans and in 1917 he traveled in Europe, playing in revues and briefly with Will Marion Cook's Southern Syncopated Orchestra. When he returned home to New Orleans in 1918 he discovered that his entire family had been killed by a flu epidemic except for one brother. He and his surviving brother, James "Steady Roll" Johnson, moved to St. Louis in 1920 where Lonnie played with Charles Creath's Jazz-O-Maniacs and with Fate Marable in their Mississippi riverboat bands. In 1925 Johnson married blues singer Mary Johnson and won a blues contest sponsored by the Okeh record company. Part of the prize was a recording deal with the company. Throughout the rest of the 1920s he recorded with a variety of bands and musicians, including Eddie Lang, Louis Armstrong & His Hot Five and the Duke Ellington And His Orchestra. In the 1930s Johnson moved to Cleveland, Ohio and worked with the Putney Dandridge And His Orchestra, and then in a tire factory and steel mill. In 1937 he moved back to Chicago and played with Johnny Dodds and Jimmie Noone. Johnson continued to play for the rest of his life, but was often forced to leave the music business for periods to make a living. In 1963 he once again appeared briefly with Duke Ellington.
Sites:
Wikipedia, redhotjazz.com, MySpace
Aliases:
Bud Wilson (2), George Jefferson (3), Jimmy Jordan, Tommy Jordan (2)
In Groups:
Blind Willie Dunn & His Gin Bottle Four, Blue Boys (2), Bob Shaffner And Harlem Hot Shots, Duke Ellington And His Orchestra, Johnson Boys, Lonnie Johnson Trio, Louis Armstrong & His Hot Five, Louis Armstrong And His Orchestra, Louis Armstrong And His Savoy Ballroom Five, Ollie Shepard & His Kentucky Boys
Variations:
Viewing All | Lonnie Johnson (2)
Alonzo "Lonnie" Johnson, Alonzo 'Lonnie' Johnson, Alonzo Johnson, H. Johnson, J.J. Johnson, Jessie J. Johnson, Jessie Johnson-Lonnie Johnson, Johnson, L. Johnson, L. Johnson, Lanny Johnson, Larry Johnson, Lenny Johnson, Lonnie Jackson, Lonnie Johnson, Lonnie Johnson Blues Vocal With Guitar, Lonny Johnson, W. Johnson

July 25, 2019
Lonnie Johnson has been credited as the man who invented the guitar solo. Check out his stuff from the 20's.
Reply Notify me 3 Helpful