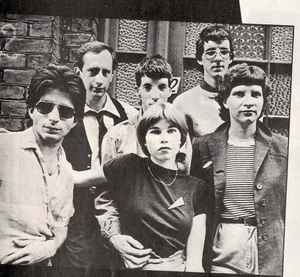 Martha And The Muffins

Profile:
Martha and the Muffins emerged from the early punk/new wave/art pop scene in 1977 which was centered around various clubs along Toronto's Queen Street West and the Ontario College of Art, where several members of the band were students.

The band was signed by Virgin Records UK and recorded their first album, Metro Music at The Manor near Oxford, England in 1979. After "Echo Beach" became a top ten single around the world in 1980 MatM toured extensively in Britain, Europe and North America. Since then, the band has released seven studio albums internationally, three of which were co-produced with Daniel Lanois. In 1983, lead vocalist Martha Johnson and guitarist Mark Gane pared the band down to a duo and briefly changed the name to M+M. Combining sonic textures and art funk in their dance single "Black Stations/White Stations", the song reached 2 in Billboard's Dance Chart in 1984.

Martha and Mark spent much of the '90's scoring music for various television and film projects. The birth of their daughter in 1992, inspired Martha to write and record an album of original children's music, Songs From The Tree House which won the 1996 Juno Award for Best Children's Album.

July 14, 2019
Underrated band - talented musicians and the albums I have all have great production - check em out - the LPs are usually cheap as chips.