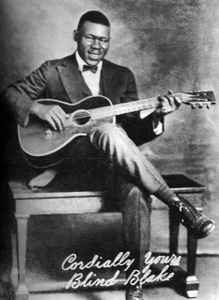 Blind Blake recorded about 80 tracks for Paramount in the late 1920s and early 1930s. He was one of the most accomplished guitarists of his genre with a surprisingly diverse range of material. His complex and intricate fingerpicking has inspired Rev. Gary Davis, Jorma Kaukonen, Ry Cooder, Ralph McTell and many others. He is most known for his distinct guitar sound that was comparable in sound and style to a ragtime piano.