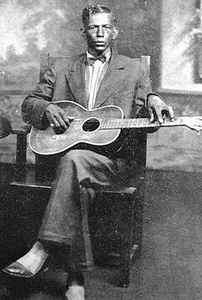 Profile:
Charlie Patton, better known as Charley Patton, was an American Delta blues singer, guitarist and songwriter. Considered by many to be the "Father of the Delta Blues", he inspired most Delta blues musicians.

Patton's parentage and race also are uncertain. His parents were Bill and Annie Patton, but locally he was regarded as having been fathered by former slave Henderson Chatmon, several of whose children became popular Delta musicians, as solo performers and as members of groups such as the Mississippi Sheiks. Biographer John Fahey described Patton as having "light skin and Caucasian features." Patton was considered African-American, but because of his light complexion there has been much speculation about his ancestry over the years. One theory endorsed by blues musician Howlin' Wolf was that Patton was Mexican or Cherokee. It is now generally agreed that Patton was of mixed heritage, with white, black, and Native ancestors.

In 1897, his family to Dockery Plantation, a cotton farm and sawmill near Ruleville, Mississippi. There, Patton developed his musical style, influenced by Henry Sloan, who had a new, unusual style of playing music, which is now considered an early form of the blues. Patton performed at Dockery and nearby plantations and began an association with Willie Brown (2). Tommy Johnson, fiddlin' joe martin, Robert Johnson, and Howlin' Wolf also lived and performed in the area, and Patton served as a mentor to these younger performers. He gained popularity for his showmanship, sometimes playing with the guitar down on his knees, behind his head, or behind his back.

He died on the Heathman-Dedham plantation, near Indianola, on April 28, 1934, and is buried in Holly Ridge (both towns are located in Sunflower County). His death certificate states that he died of a mitral valve disorder. Patton's death was not reported in the newspapers.