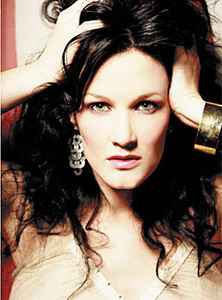 Tiffany Lee (née Arbuckle) (born 1975, in Indianapolis, Indiana) is a Contemporary Christian music artist who uses the stage name Plumb. She frequently crosses over into numerous other genres of music, including Alternative rock, Christian alternative rock, Pop, Dance, and Electronica.

Tiffany is married to Jeremy Lee (2) (founder of FlatRock Management).

Plumb grew up in Fayetteville, Georgia, and started her career as a backup singer. Her album "candycoatedwaterdrops" won the 2000 Dove Award for "Modern Rock Album of the Year". Two tracks from it were hits for other artists; "Stranded" was a hit for Jennifer Paige, and "Damaged" was a big dance hit in 2003 in the United Kingdom for Plummet.

Plumb was marketed as a band during the first three album releases on Essential Records. The band was named after the Suzanne Vega song "My Favorite Plum".

Plumb wanted to leave the music industry after the 2000 album. Lee received a note from a girl a few hours before what she thought to be her final concert. The letter was about the Plumb song "Damaged" that Tiffany had written and recorded about a girl coping with being molested as a child. The note said "'Whatever you do, I just want you to never forget that you have changed someone's life." The note inspired Tiffany to remain in the music industry. She signed to Curb Records as a solo artist in 2003, releasing the album Beautiful Lumps of Coal. In order to leave Essential Records, Plumb had to fulfill her contract obligations, and this led to The Best of Plumb record in 2000 despite the fact she had only released two albums previously. The lead single from Plumb's 2003 Beautiful Lumps of Coal, called "Real", peaked at #41 in the UK Singles Chart.

She has also written songs for artists such as Michelle Branch, Kimberley Locke, and Mandy Moore. Amy Lee (no relation) of Evanescence mentioned that Plumb was one of her inspirations.

Her third solo album Blink was released on , 2007. "In My Arms", the first single off the album, was remixed by Kaskade, Scotty K, Bronleewe & Bose, Gomi, and Bimbo Jones and hit the number one spot on the Billboard Dance Charts.

On May 19, 2009 she announced that she was recording a new album titled Beautiful History due out in the fall.
Sites:
plumbmusic.net, Wikipedia, spirit-of-rock.com
Members:
J. J. Plasencio, Joe Porter (2), Matt Stanfield, Stephen Leiweke, Tiffany Arbuckle Lee

February 4, 2013
How is it that her (actually their, as Plumb was a group at the time) album candycoatedwaterdrops album's mentioned in her bio' but doesn't figure in the discography?! Alsop, Beautiful History's a compilation album, and she has a new one oming out this month. Sheeyeesh!