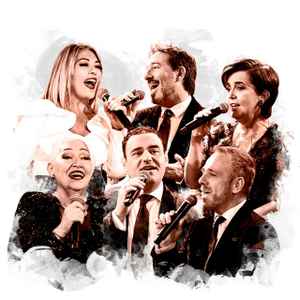 Profile:
Spanish vocal band. In their beginnings they were just three sisters, Amaya (b. 1947), Izaskun (b. 1950) and Estíbaliz Uranga Amézaga (b. 1952), "Las Hermanas Uranga". Later they changed their name to "Voces Y Guitarras (1967), and finally to "Mocedades". In 1969 they released their first album produced by Juan Carlos Calderón. They reached second place in the Eurovision Song Contest of 1973 with the song 'Eres Tú'.

Mocedades started with 8 people but they have changed along time.. First two albums were recorded by the original line-up: brothers Uranga (Amaya, Estíbaliz, Izaskum and Roberto), brothers Blanco (Rafael and Sergio), José Manuel Ipiña and Francisco Panera. At late 1970 José Ipiña and Francisco Panera left and Javier Garay joined the band. In 1972 Estíbaliz and brothers Rafael and Sergio Blanco left and they were re-joined by José Ipiña and Carlos Zubiaga. With this "historic" line-up (Amaya, Carlos, Izaskum, Javier, José and Roberto) they had their best hits.

In 1984 Amaya left the band to follow a solo career, being replaced by Ana Bejerano recording three albums: "Colores", "Sobreviviremos" and "Intimamente". This last one released in 1992 with Ana, Javier, Izaskum, Roberto and Iñaki Uranga (who replaced José and Carlos, who left in 1988). In 1993 Izaskum and Javier remained as the only survivors on the band, and they were joined by José García, Iñigo Zubizarreta and Inés Rangil recording "Suave Luz" in 1995 (with arrangements by Joan Bibiloni).

August 16, 2013
This is not on the TARA label from Ireland. It is Spanish/American