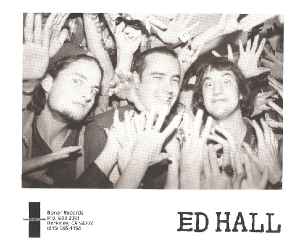 The band is composed of Gary Chester, guitarist, Larry Strub, bassist, and Kevin Whitley, drummer in the first three albums. Their style is a mix of post hardcore, psychedelic rock and hardcore, a sound sometimes similar to Butthole Surfers. Maybe for this reason from 1991 to 1995 they record their lps on Trance Syndicate Records, independent record label founded in 1990 by King Coffey, drummer of Butthole Surfers. The band split in 1996.
Sites:
Wikipedia
Members:
Andrew B. Colvin, Gary Chester (3), Kevin Whitley (3), Larry Strub, Lyman Hardy
Variations:
Viewing All | Ed Hall
Hall

The band had a 6th album in the works called "Permission to Rock... Denied" but cancelled since they broke up (it is available online to listen to). I asked the band on Facebook a few month ago whether or not they will release the record and whoever responded back says its a possibility.