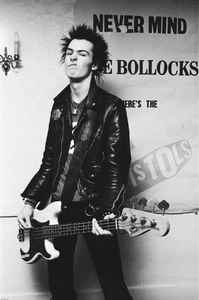 In 1976, he began his musical career as part London's burgeoning punk scene, playing drums for Siouxsie & The Banshees at their first gig; briefly part of the Flowers Of Romance with Keith Levene; and was considered for lead singer in The Damned, though he didn't show up for the audition. In early 1977, he replaced Glen Matlock on bass in the Sex Pistols. After the Sex Pistols disbanded, he performed gigs with a number of artists and backup musicians. In July 1978, he played his final show in the UK as part of the one-off group, The Vicious White Kids.

He moved to New York City, and in September 1978 he performed his final gigs at Max's Kansas City. On 12 October 1978, he was arrested for the murder of his girlfriend Nancy Spungen (2). Ten days later, he tried to kill himself and was sent to Bellevue Hospital. On 2 February 1979, while out on bail, Vicious officially died of "acute intravenous narcotism," also known as a drug overdose.
Sites:
Wikipedia, punk77.co.uk
Aliases:
John Beverley
Variations:
Viewing All | Sid Vicious
S. Vicious, Sid, Sid Vicious And Friends, Syd Vicious, Vicious, Vivious, シド

Can't wear that swastika shirt around my Jewish friends, Sidney!! LOVE YA!! RIP

GREAT STYLE. PURE PUNK. DIED MUCH TO YOUNG. I'm one of many who owned some of Sid's records and loved his image. I sort of learned later on that you gotta do your own thing and go your own way. You only get one LIFE. Do what ya like! I'm not gonna tell you what to do. HAVE FUN!! FUCK UP. LEARN. CREATE. ETC. You'll be DEAD one DAY. Don't rush it!!

SID YA FUCKIN RULE AND I REALIZE YOU WERE HEARTBROKEN AND A JUNKIE N YOUNG AND I SOMETIMES WONDER ABOUT -YOU-. WONDER WHAT YA WOULD'VE BECOME. SO YOUNG. RIP LOST SOUL. NANCY ALSO RIP. TRAGEDY. NO FUTURE.

Best to all punks LIVING fucked up lives or who can't fit into SOCIETY. Lo0sers since birth. What's new?