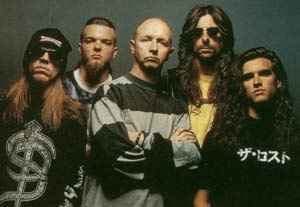 Profile:
Fight was a Heavy Metal band formed in the summer of 1993 by British vocalist Rob Halford, and consisting of various musicians from the United States (where Halford was living at the time). He began writing material back in 1991, freshly inspired by the sound of Pantera on their "Cowboys From Hell" tour.

The project was, initially, meant to be a brief solo indulgence while Rob remained a member of Judas Priest. However, their relationship became steadily worse in 1992, and in September he was legally no longer part of the band.

Fight's first album War Of Words was released in 1993. Drawing strongly from aggressive, American-styled Heavy Metal and elements of Thrash, the album sold over 200,000 copies and remains a favourite amongst Priest fans. An EP of live tracks and remixes followed in 1994, and in 1995 the band released their second and final album A Small Deadly Space, which contained a rough, Alternative Metal sound and saw the other band members contribute to the writing process.

Although Rob was preparing material for a third album, Fight split in the fall of 1995 after Epic Records dropped them.

I have 6 more singles to add to the list. Just want to see if anybody else has the following items because I seem to get more warnings on submissions than completed entries.
Fight I am alive single ESK 7085
Fight Blowout in the radio room ESK 6949
Fight Immortal Sin ESK 5599
Fight Little Crazy ESK 5496
Fight Little Crazy ESK 5632
Fight Christmas Ride ESK 6654
Fight Nailed to the gun 7" ARIE 3220 Madrid