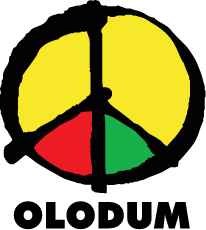 Profile:
Olodum is a cultural group based in the Afro Brazilian community of Salvador, the capital city of the state of Bahia, Brazil. It was founded by percussionist, Neguinho do Samba.
One of many similar groups in the city (and elsewhere in Brazil), it offers cultural activities to young people, largely centered around music; it also offers theatrical productions and other activities. Founded in 1979, its stated aims are to combat racism, to encourage self-esteem and pride among Afro Brazilians, and to fight for civil rights for all marginalized groups.
Olodum is widely credited with developing the music style known as samba reggae and for its active participation in carnaval each year. Neguinho do Samba, the lead percussionist, created a mix of the traditional Brazilian samba beat with merengue, salsa, and reggae rhythms for the Carnaval of 1986. This became known as samba reggae. This "bloco afro" music is closely tied to its African roots, as seen through its percussion instruments, participatory dancing and unique rhythm. It also directly draws from many Caribbean cultures, like Cuba and Puerto Rico. Olodum's performing band (or Banda) has released records in its own right and has been featured on recordings by Brazilian stars such as Simone and Daniela Mercury.

Olodum performed on Paul Simon's 1990 album The Rhythm of the Saints and at the subsequent concert in Central Park, New York City on August 15, 1991.