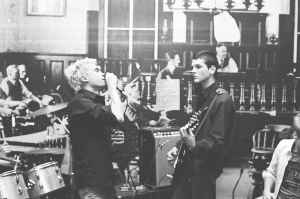 Profile:
Short-lived Hardcore band from the early 80s based out of Washington, DC, USA.

Legend has it that when State Of Alert frontman Henry Rollins departed Washington, DC, in 1981 to join Black Flag, he tried to recruit Untouchables vocalist Alec MacKaye to take his spot in his old band but that MacKaye was not interested in singing Henry's words. Instead, MacKaye, guitarist Michael Hampton and drummer Ivor Hanson (the latter two formerly of the aforementioned State of Alert) hooked up with bassist Chris Bald to form Faith (or, as they are also referred to, The Faith). In 1982, the band made their vinyl debut as part of a split LP with Maryland's Void (12). Following that release, Faith added a second guitarist, Eddie Janney (Alec's former Untouchables bandmate). This line-up appeared on the band's 1983 EP "Subject To Change" but the band split that same year. In 1985, Hampton, Hanson, and Bald would reunite in the short-lived Embrace (2) which was fronted by Alec's brother, Ian.
Sites:
dischord.com
Members:
Alec MacKaye, Chris Bald, Eddie Janney, Ivor Hanson, Michael Hampton (3)
Variations:
Viewing All | Faith (3)
The Faith

all there is is in the hardcore (EN, hardcore, emocore, post-hardcore) by cactus2101
Artists and Bands I Like and Recommend by Andrew_Lawson
“The Encyclopedia Of Punk” by crimsonmetal74
Favorite artists by patlebouc
Hardcore bomb raid by boomshine
Folks I've Seen Live by rexjwb
Artists in My LP Collection by sillypenta
View More Lists →