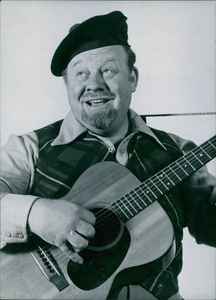 It has been said he gave his first professional performance at age 4 in 1913, singing "Barbara Allen" at a picnic, which earned him one dollar. Having recorded numerous albums and singles over a career lasting more than 40 years, his biggest record was "A Little Bitty Tear" released by Decca as a single in November 1961. In 1962 he released another hit single "Funny Way of Laughin'", it appeared on the album "It's Just My Funny Way of Laughin'" and won Ives a Grammy Award for Best Country Western Recording.

He recorded numerous children's recordings and recorded several religious albums for Word Records and made a significant contribution to the popularization of folk music. He will also be remembered for playing a handful of powerful performances on stage and film. Academy Award winning American actor, Broadway performer and acclaimed folk music singer and author, Burl Ives died from complications of mouth cancer in 1995 at the age of 85.
Sites:
burlives.com, Wikipedia
In Groups:
The Union Boys
Variations:
Viewing All | Burl Ives
B. Ives, Bur Ives, Burl, Burl Ives And The Men Of Song, Burl Ives and Male Chorus, Ives