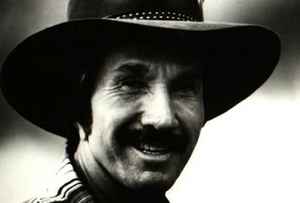 Born into poverty with his twin sister Mamie, he quit school in his teens and served in the United States Navy during 1943–1945. Robbins’ career started in 1947, and he soon had his own radio and television shows on KPHO in Phoenix. His big break came in 1951 when Jimmy Dickens guested on his TV show. Dickens was so impressed that he encouraged his record company, Columbia, to give Robbins a contract. In 1953 Robbins joined the Grand Ole Opry and moved to Nashville, and in 1965 he started performing on the last segment of the Opry so he could race stock car at the Nashville Speedway. Among the more successful crossover artists during the 1950s and 1960s, Robbins was able to handle a wide variety of musical styles with his versatile baritone. He recorded country, western, rockabilly, Hawaiian music, gospel, and his specialty, which was pop ballads. Over the course of his career, Robbins had a total of 94 charting records, with 16 going to the #1 position.