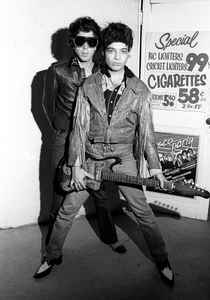 Profile:
Suicide was an American musical duo composed of vocalist Alan Vega and instrumentalist Martin Rev, intermittently active between 1970 and 2016.

"The Brooklyn-born Alan Bermowitz (Vega) and Bronx-born Martin Reverby (Rev) first met up in the summer of 1969. Vega was engaged with sculptures and far-flung electronic experiments at the Project of Living Artists, a downtown workshop funded by the New York State Council On the Arts. Rev, already a veteran of avant-jazz ensembles, wandered into the workshop to escape the torrential rain.

The two hit it off and began performing together at local galleries. Their second show was entitled Punk Music Mass, which is said to have been the first time a band used the word “punk” in an official context to describe their music. The name Suicide was inspired by Satan Suicide, an issue of Vega’s favourite comic book, Ghost Rider.

When Vega and Rev started making music, they were both limited and liberated by their poverty. Often starving, living on a sandwich a day between them and unable to afford proper instruments, they made their music on the one instrument available to them: Rev’s $10 Wurlitzer keyboard, over which Vega would improvise." Jon Wilde for The Guardian
Sites:
Facebook, instagram.com, Twitter, Wikipedia, fromthearchives.org, theguardian.com
Members:
Alan Bermowitz, Marev, Martin Reverby
Variations:
Viewing All | Suicide
Alan Vega & Martin Rev's Suicide

January 9, 2021
sometime around 2005 there was a Tia Maria TV advert in the UK which used 'A-Man' from The First Rehearsal Tapes...that seems a much weirder choice than 'Cheree' for the Marc Jacobs ad...let's just hope everyone who gets interested via hearing them on TV gets to hear 'Frankie Teardrop'.
Reply Notify me Helpful

May 3, 2020
Maybe it depends which track!!! Some of it is smooth enough...
Reply Notify me Helpful

I just heard Suicide on a perfume commercial on TV yesterday. "Daisy" by Marc Jacobs, should I be happy or pissed off?
I'm conflicted!