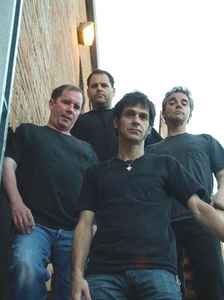 Profile:
The Last are a pop-rock band from Los Angeles, CA, led by singer/guitarist/songwriter Joe Nolte. Joe and his brother, Mike (keyboards, vocals, & occasional songwriting), have been the only constant members of the band since its formation in the mid 1970s. The band spawned from the same scene the launched such bands as Black Flag, Redd Kross, the Descendents, and the Circle Jerks. The early line-ups also included another Nolte brother, David, on bass and Vitus Mataré on keyboards and flute. In 1979, this line-up (including drummer Jack Reynolds), recorded their first album, "LA Explosion!", now considered a classic amongst the band's fans. In 1980, the band, with new drummer John Frank, recorded a follow up titled "Look Again" but the band was unable to secure a record deal and the release was scrapped. The following years were spent dealing with various line-up changes. In 1983, "Painting Smiles On A Dead Man", a collection of demos, was released. In 1985, following more line up changes, the band split.

In 1987, Joe and Mike resurrected the band with a new line up that included Luke Lohnes (guitar), Larry Manke (bass), and Dave Nazworthy (drums) and signed a deal with SST Records. In 1988 "Confession" appeared, followed in 1989 by "Awakening". Unfortunately for the band, neither album sold very well and "Awakening" cost so much to produce that it allegedly caused severe repercussions for the label. Despite this, SST was willing to do another album with the band, but Joe Nolte was so disillusioned by the group's 1989 tour that it took some time to get motivated for a new record. The band began recording a follow-up in 1991 but, due to scheduling issues, the record was not completed until 1994. After that, the band got caught up in a contract renegotiation with SST that delayed the release even further and the final product, entitled "Gin & Innuendoes" did not appear until 1996. The Last did not release another album until 2013's "Danger", which saw Joe and Mike backed by longtime friends and fans Karl Alvarez and Bill Stevenson of the Descendents. Their long-lost second album, "Look Again", finally saw official release in 2020.
Sites:
laexplosion.com, MySpace, Facebook, Bandcamp
Members:
Bill Stevenson, Dave Naz, David Nolte, Ed Urlik, Hunter Crowley, Jack Reynolds, Joe Nolte, John Frank (3), John Rosewall, Karl Alvarez, Larry Manke, Luke Lohnes, Mike Nolte, Phil Van Duyne, Vitus Mataré
Variations:
Viewing All | The Last
Last