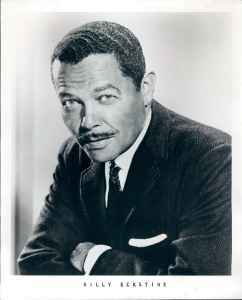 US American Jazz singer & bandleader noted during the swing area for his rich, almost operatic bass-baritone voice
Eckstine, the son of a Pittsburg chauffeur and seamstress, began his singing career in a church bazaar at the age of eleven. The family moved to Washington, where he ran errands at the Howard Theater for Ethel Waters- earning enough pocket money to enter a talent contest, which he won in 1932.

He quit school and joined the Tommy Miles Band, learning the trumpet to support his vocals. Bandleader Earl Hines heard Eckstine at the De Lizza Club and added him to his band's line-up, with whom he recorded 'Skylark' which outsold the Glenn Miller version. Eckstine's growing success enabled him to open his own club on New York's 52nd Street, which eventually closed due to crippling entertainment taxes. He then took to the road with his own historic band, helping pave the way for the bebop/modern jazz style movement with its musical arranger John Birks Gillespie.

Rest... In... Peace... by crimsonmetal74
Artists for the Future by Milesbeet-hoven1
View More Lists →