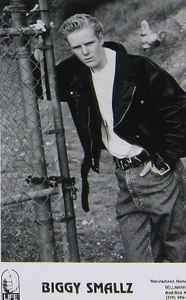 Real Name:
Tim Bigelow
Profile:
Biggy Smallz (born in 1979) was an underground White/Latino rapper from the west coast who started recording music in 1991 when he was around 12 years old. He is the main reason The Notorious B.I.G. was unable to use his nickname (Biggie Smalls) as his official stage name. By the time The Notorious B.I.G's album Ready To Die dropped in September 1994, the original Biggy Smallz was just 16 years old. Ready To Die inadvertently helped boost the sales of the original Biggy Smallz' records due to confusion in the listening market. In other words, people accidentally bought Biggy Smallz' records thinking they were buying The Notorious B.I.G's.

Although he did release other songs. When The Gulf War ended in 1991 he, like many artists, created a tribute song about it entitled "When Duty Calls."
Sites:
wikibin.org
Aliases:
Shadowcast