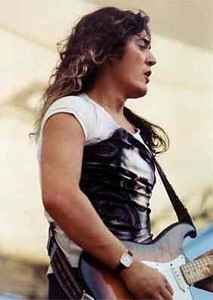 Real Name:
Thomas Richard Bolin
Profile:
Tommy Bolin (August 1, 1951 – December 4, 1976) was an American guitarist and songwriter who played with Zephyr (from 1969 to 1971), James Gang (from 1973 through 1974), and Deep Purple (from 1975 to 1976), in addition to maintaining a notable career as a solo artist and session musician. Much of his discography was either unreleased at the time of recording, or had gone out of print and was not released again until years after his death by drug overdose at age 25.

September 25, 2018
i dont normally leace comments but feel tommy needs a comment he was an amazing player he ended up going down the getting wrecked path but remember him for what he was a truly great guitar player his true passion bless
Reply Notify me Helpful

Rest... In... Peace... by crimsonmetal74
Artists for the Future by Milesbeet-hoven1
“All Music Guide: Required Listening-Classic Rock” by crimsonmetal74
drug related artist deaths by 8m2stereo
Listen to .... by Backstar
View More Lists →