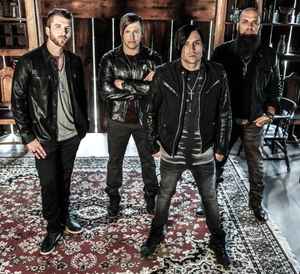 Started out as the band Groundswell in 1992, they released one album in 1995 before dissolving and reforming as Three Days Grace in 1997. The band has since drawn a large audience in North America and Europe. Following the release of their 4th studio album Transit Of Venus lead singer Adam Gontier announced he would leave the band due to personal health concerns. The band then recruited Matt Walst as his replacement.
Sites:
threedaysgrace.com, Facebook, Twitter, instagram.com, MySpace, YouTube, threedaysgraceofficial.tumblr.com
Aliases:
Groundswell (2)
Members:
Adam Gontier, Barry Stock (2), Brad Walst, Matt Walst, Neil Sanderson, Trevor McNevan

October 1, 2022
really wish transit of venus would get a vinyl pressing

December 8, 2021
my favorite Canadian band who is known for the songs I Hate Everything About You, Animal I Have Become & more