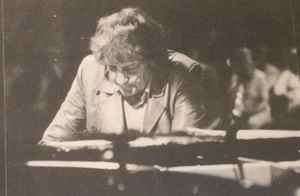 Stan Tracey cited Duke Ellington and Thelonious Monk as his main influences. Widely regarded as the "Grandfather Of British Jazz", and one of the most prolific performers at Ronnie Scott's Jazz Club, he performed alongside many of the other American and European greats. Already an Officer of the Order of the British Empire (OBE), he was later appointed Commander of the Order of the British Empire (CBE) in the 2008 New Year Honours.

Mr Stan Tracey, a definite genius of our time.
Give this man a crown; truly a man deserving of praise for his efforts in all things 'British Jazz' and beyond.

Many have compared him with Thelonius Monk, and an easy comparison of talents can certainly be made, though differences with style & content are obvious.
Talent wise, yes he is of certain equal compare, but by composition he is stripped of any measure of equality. A style all of his own is noticeable and to public eyes 'Under Milk Wood' proves this fact.
Playing style wise, he almost bends notes in a Duke Ellington fashion, and the overall harmonies & voicings are original of his own sound. Just check "Baby Blue" (with Tubby Hayes) for a degree of authority, and a Bassey feel incorporated within.

Listening live is the best way of seeing this mans' true talent. Any live gigs in your area are worth taking time for.