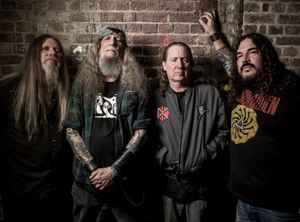 The band was formed in 1979 under the name Tyrant, with Dave Chandler (guitar, vocals), Mark Adams (bass), and Armando Acosta (drums), but soon added Scott Reagers on vocals and changed their name to Saint Vitus after the song "St. Vitus' Dance" by Black Sabbath. Their main influences were Sabbath and Black Flag, the latter of which Saint Vitus toured with during the 1980's.

Reagers recorded vocals for the band's final album, "Die Healing". After this, Saint Vitus decided to call it a day in 1996.

As of 2008, Saint Vitus have reformed again. The band headlined the April 24 date at the 2009 Roadburn Festival. The lineup for this reunion was the same as the 2003 reunion. Sometime after this gig, drummer Armando Acosta was removed from the band and was replaced by Henry Vasquez, with health concerns being cited as the primary case for his removal (Acosta eventually passed away in November 2010).
Sites:
saintvitusband.com, Bandcamp, instagram.com, MySpace, reverbnation.com, Twitter
Members:
Armando Acosta, Christian Linderson, Dave Chandler, Henry Vasquez, Mark Adams (3), Pat Bruders, Scott Reagers, Scott Weinrich
Variations:
Viewing All | Saint Vitus
S. V., S.V., St. Vitus, Vitus

April 18, 2022
Gosh this band could use some quality reissues, their albums are impossible to get