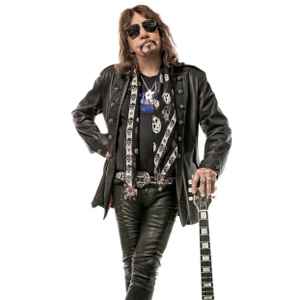 Paul Daniel "Ace" Frehley (pronounced /ˈfreɪli/) is an American musician best known as the original lead guitarist of the rock band Kiss. He took on the persona of the "Spaceman" or "Space Ace" when the band adopted costumes and theatrics. Frehley played with the group from its inception in 1973 until his departure in 1982.

After leaving Kiss, Frehley embarked on a solo career, which was put on hold when he rejoined Kiss in 1996 for a highly successful reunion tour. His second tenure with Kiss lasted until 2002, when he left at the conclusion of what was purported to be the band's Farewell Tour. His latest album, Origins, Volume 2, was released in September of 2020.

Frehley was born and raised in The Bronx, the youngest of three children. He has a sister Nancy and a brother Charles, a classical guitarist. As a youth, Frehley was in a New York street gang called The Duckies. The Frehleys were a musical family, and when Frehley received an electric guitar as a Christmas present in 1964, he immersed himself in learning the instrument. "I never went to music school; I never took a guitar lesson, but everybody in my family plays an instrument. My mother and father both played piano." His father was the church organist, and his brother and sister both played piano and acoustic guitar. Frehley was always surrounded by music, and started playing guitar at age 13. He lists Jimi Hendrix, Albert Lee, Buddy Guy, Eric Clapton, B.B. King, Led Zeppelin, The Rolling Stones, and The Who as his main influences.

Frehley did well in the arts department in high school. Later in 1993, he would use his graphic arts skills to produce art work from a computer and sell the work in an art gallery in New Jersey.

Frehley spent the early 1970s in a series of local bands including prog rockers Molimo who recorded an album for RCA in 1971. In late 1972, his best friend, Bob McAdams (co-author of the book Kiss & Tell), spotted an advertisement for a lead guitarist in the Village Voice and showed the ad to Frehley. Both McAdams and Frehley went to 10 East 23rd Street above the Live Bait Bar. Frehley auditioned for former Wicked Lester (2) members Paul Stanley (rhythm guitar) and Gene Simmons (bass guitar), and Peter Criss (drums). Frehley, who showed up wearing one red sneaker and one orange sneaker, was less than impressive visually, and they thought he was weird, but all three have later said that as soon as he plugged in, they knew he was the guy. About three weeks after Frehley auditioned, the new group named him their lead guitarist, and by January 1973, had decided on a name for the new group - KISS. Frehley designed the band's double-lightning-bolt logo. The band quickly decided to paint their faces for live performances, and Frehley decided to start painting silver stars on his eyes.

While KISS spent their early days rehearsing and playing in empty clubs, Frehley took a job as a part-time cab driver to pay his bills. In September 1973, Kiss began to receive a salary from new manager Bill Aucoin that paid each member $75 a week. This enabled Frehley to quit his job.

KISS released their debut album, KISS, in February 1974—Frehley's sole songwriting contribution was "Cold Gin". Due to Frehley's lack of confidence in his own singing voice, however, the vocals were performed by Simmons. Frehley wrote or co-wrote several of the band's songs over the next few years but didn't record his vocals on a song until "Shock Me" (inspired by his near-electrocution during a concert in Lakeland, Florida), which appeared on 1977's Love Gun.

As lead guitarist, Frehley was known for his frenetic, atmospheric playing, becoming one of the most popular guitarists in the 70s and spawning a generation of new players. Frehley stated in the book KISS: Behind the Mask that many guitarists have told him his playing on 1975's hit double-album Alive! prompted them to pick up the instrument. Frehley is well recognized for using Gibson Les Paul guitars, including his custom converted guitars that appear to be on fire, and fill the stage full of smoke during his live guitar solo.

Along with the three other KISS members, Frehley released an eponymous solo album in 1978. His was the best-selling of the four, and the album's lone single — the Russ Ballard-written "New York Groove"), originally recorded by Hello — reached the Top 20 in the United States.

Frehley's songwriting presence within the group increased in 1979. He contributed three songs for 1979's Dynasty and three for 1980's Unmasked. While this was not the best time for KISS on a commercial level in the United States, they were only just beginning to take off in other countries (mostly in Australia, where Dynasty and Unmasked are their highest-selling albums). But even as his songwriting role within KISS was increasing, Frehley found himself increasingly at odds with the musical direction of the band. After Peter Criss was fired from KISS in 1980, Frehley was often outvoted 2-1 in band decisions, as replacement drummer Eric Carr was not a partner in KISS and had no vote. Frehley's participation in the recording of 1981's "Music from The Elder" was more limited than with previous albums. This was in large part due to his unhappiness with the band's decision to create a concept album rather than a straightforward rock album, and also, by Frehley's own admission, his "not relating all that well" to producer Bob Ezrin, who cut many of Frehley's solos from the recorded tracks.

Although Frehley appeared on the covers for 1982's greatest hits album Killers and studio album Creatures of the Night, he had no musical involvement with Killers, and only minimal input on Creatures Of The Night. Frehley's last appearances with the band were the video for "I Love it Loud," a series of European promotional appearances in November 1982 and a band interview with MTV in early 1983 promoting their world tour.

In 1984, Frehley started his post-KISS solo career by assembling a band that included, among others, drummer Anton Fig (who had performed on Frehley's 1978 solo album and on two Kiss albums). Bassist John Regan (who had worked with Peter Frampton), whom Frehley met in 1980, was also an original member of the band as was vocalist/guitarist Richie Scarlet and keyboardist Arthur Stead. The group, whose name alternated between 'Ace Frehley' and Frehley's Comet, recorded a series of demos throughout 1984 and 1985. After a few unsuccessful attempts at securing a recording contract, the group eventually signed to Megaforce Records and released their first album, Frehley's Comet, on July 7, 1987. The album was co-produced by Eddie Kramer, who had produced not only a number of Kiss albums, but Frehley's 1978 album and some of his 1984-85 demos, and Frehley has gone on to release five more albums in the years since its release. He has just a second album of cover songs called Origins, Vol. 2.
Sites:
acefrehley.com, Wikipedia, instagram.com, MySpace, Facebook, Twitter
Aliases:
Paul Frehley
Variations:
Viewing All | Ace Frehley
A. Frehley, A. Frenley, A.Frehley, Ace, Ace Freeley, Ace Frehly, Anton Fig, Bob Ezrin, Frehely, Frehley, Эйс Фрили

October 1, 2020
One my favorite guitar players and has made an impact on many others , Ace was the really rock star in Kiss .
Reply Notify me 2 Helpful

August 20, 2014
Space Invader vinyl has been released in UK. Once my copy comes, I will add to database.
Reply Notify me Helpful