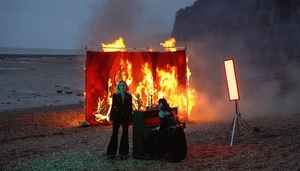 The band formed in 2010 as an acoustic duo comprising singer Ellie Rowsell and guitarist Joff Oddie, who performed songs under the name Wolf Alice. “Wolf-Alice” is a variation on the old "Little Red Riding Hood" theme, from a short story by Angela Carter, about a feral child who is raised by wolves: “Nothing about her is human except that she is not a wolf”.