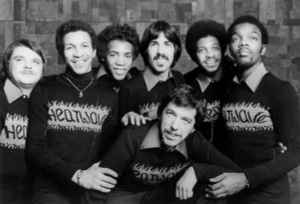 Profile:
International disco-funk group, formed in Europe in mid-1970s. Heatwave was founded by Johnnie Wilder, an American serviceman based in West Germany, who stayed on there after his discharge. He sang in local clubs until he moved to the UK and met Rod Temperton through an ad in the paper. Calling themselves the Chicago Heatwave, they recruited Johnnie's brother, Keith. Signed to GTO records in 1976, they went into the studio that fall with producer Barry Blue. In the UK, their first two singles tanked, but the third one "Boogie Nights" went on to become an iconic disco anthem. It became their debut single in the US peaking at #2 early in 1977. Their follow up became an R&B classic, "Always and Forever" and peaked at #18. Writer and keyboardist Rod Temperton continued to write songs, giving Heatwave on more top ten single, "The Groove Line" in 1978. Temperton went on to write hit songs for Michael Jackson. The band faced several tragedies, first with Mario Mantese being stabbed by his enraged girlfriend then falling into a coma for months only to revive as blind, mute and paralyzed. In 1979 founding member Johnnie Wilder was paralyzed from the neck down in a serious auto accident and unable to perform with the group. He continued on as a co producer with Barry Blue. JD Nicholas replaced him for concert appearances. 1980 saw the release of the #21 single, "Gangsters Of The Groove". Then, members one by one left the band until Heatwave died a quiet death in 1983. Keith Wilder tried to restart the band in 1988, but had to wait until 1991, when a remix of "Mind Blowing Decisions" became a hit in the UK to put a new band together. Keith Wilder now handles lead vocals and is the only original member left. Johnnie Wilder died peacefully in his sleep in May of 2006. "Boogie Nights" lived on in the 90's as the title of the Mark Wahlberg movie of the same name about the rise of pornography. However, the song did not appear in the movie.
Sites:
MySpace, Wikipedia, allmusic.com, whosampled.com
Members:
Byron Byrd, Calvin Duke, Derek Bramble, Eric Johns, Ernest Berger, J.D. Nicholas, Johnnie Wilder Jr., Keith Harrison, Keith Wilder, Mario Mantese, Rod Temperton, Roy Carter, William Jones
Variations:
Viewing All | Heatwave
Chicago Heatwave, Heartwave, Heat Wave, Heatware, ヒートウェイブ, ヒートウェイヴ