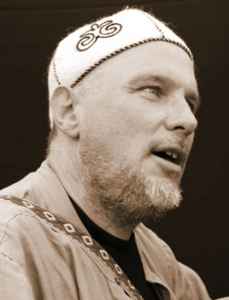 Real Name:
Сергей Старостин
Profile:
Clarinetist, folk reeds player and - last but not least - singer Sergei Starostin was born on January 1, 1956 in Moscow. He received his first musical education in a boy's choir before studying clarinet at the Moscow Conservatory. Quite early on he was interested in Russian folklore, particularly the rich traditions of Russian folk music, which he began to collect and study during his travels. Since 1982 he has given seminars and performed as a vocalist and player of traditional wind instruments. Since 1987 he has been introducing listeners to traditional music on his own radio programme in the Russian broadcasting system, and since 1991 he has directed a television programme on folk music in Moscow. As author and producer Starostin realized the "World Village Show," a programme on world music for Russian television. Through his affinity to Russian music and the music of the Lapps, he became acquainted with Mary Boine with whom he has made recordings in Moscow and Oslo. In 1990 Starostin augmented the Alperin / Shilkloper Duo to the Moscow Art Trio with which he has performed in Europe, USA, Africa and Japan as a singer and instrumentalist.
In Groups:
Farlanders, Moscow Art Trio, Moscow Composers Orchestra, Sergey Starostin's Vocal Family, The Living Earth, Vapirov Project, Vershki Da Koreshki, Трио Аркадия Шилклопера
Variations:
All | Viewing Sergey Starostin
C.N. Starostin, S. Starostin, S.Starostin, Sergei, Sergei Starostin, Sergej Starostin, Sergiy Starostin, Siergiej Starostin, Starostin, С. Старостин, С.Старостин, Сергей [Дед] Старостин, Сергей Старостин, Сергей Старостин (Дед), Старостин