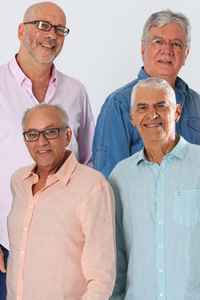 Profile:
MPB4 (Short for Música Popular Brasileira 4) is a vocal and instrumental Brazilian group formed in Niterói, Rio de Janeiro, in 1965, and has been active since.The groups main genres are sung samba and MPB, and they are considered among the best vocal interpretation group in Brazil. They have frequently collaborated with Quarteto Em Cy, Toquinho and Chico Buarque.