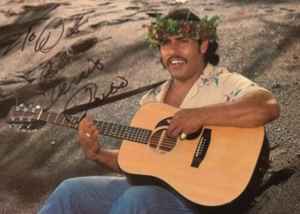 Profile:
b. July 11, 1951; d. January 19, 2002
Dennis Pavao was a Hawaiian music vocalist. He is most famous for his falsetto voice, but he also sang at the baritone range. He was the rhythm guitar player and often the lead vocalist in the 1970's for Hui Ohana, a trio that included Dennis and his two cousins Ledward and Nedward Kaapana. A left-hander, he performed with right-handed guitars, held upside down. He was a solo performer from the late 1970's until his passing in 2002. He recorded dozens of songs, but the Hawaiian sovereignty anthem, "All Hawaii Stands Together" could be considered his signature song.
In Groups:
Hui Ohana
Variations:
Viewing All | Dennis Pavao
D. Pavao