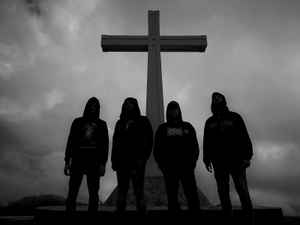 Profile:
Doom/Stoner band from Catanzaro, a city in the south of Italy, founded in 2000 by Ghenes.
Their inspirations are: old horror movies (Fulci, Bava, Argento), H.P. Lovecraft, mysticism and 70's music.
In 2008 they released the first demo cd composed by 4 tracks.
In 2009 the band recorded its first release: the MCD "Bretus - Bretus" for Maddie Records, which received good reviews from zines and webzines. Some of the album songs were also published in compilations like "Desert Sound Compilation", "Droning Earth vol.16" and "Doom Metal Alliance Sampler Vol. II".
The band released its debut album “Bretus - In Onirica” in 2012. The response was so good that they are invited to some important European Doom festivals (on top of all Malta Doom Fest and Doom Over Vienna IX).
In 2014 the Slovenian Doom Cult Records released a reprint of "Bretus - Bretus" MCD.
In 2015 the band published the 7" split with Black Capricorn via The Arcane Tapes and the new album “Bretus - The Shadow Over Innsmouth”. The last one is a concept entirely based on the H.P. Lovecraft homonymous story.
Sites:
Bandcamp, Facebook, bretus.blogspot.it, YouTube, bretus-doom.webnode.it
Members:
Gianluca Molè