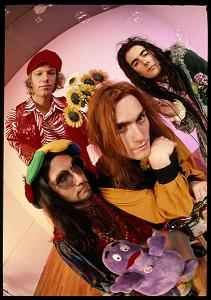 Profile:
To say Jellyfish were a 1990s power pop band from San Francisco may be true, but simply doesn’t do justice to this extremely talented West Coast outfit.

Although their career was short-lived and they only released two full-length albums, Jellyfish have gone on to influence a host of like-minded artists, whilst securing the kind of cult status bestowed upon so many of their heroes.

Jellyfish formed around the talents of former Beatnik Beach members, singer/songwriter/drummer Andy Sturmer and keyboard player/multi-instrumentalist Roger Manning. Manning and Sturmer became a songwriting team whilst writing material for a planned second Beatnik Beach album. Their songs were rejected by Beatnik Beach's leader (bassist and singer Chris Ketner) whose preference was for the band to concentrate on his own material. Consequently Sturmer and Manning quit Beatnik Beach to pursue their own project.

When recruiting for Jellyfish, the search for a guitarist led Sturmer and Manning to Jason Falkner, formerly of The Three O'Clock. Falkner joined for the recording of their debut album.

The band's debut album, Bellybutton, was released in 1990. It demonstrated the wide range of influences which the band drew from, notably Queen, Beach Boys, The Beatles, XTC, Cheap Trick, Wings (2), and Badfinger. The debut album yielded the band's biggest hit, "Baby's Coming Back," which peaked at No. 62 on the Billboard Hot 100 charts, as well as a string of solid singles ("The King Is Half-Undressed," "That Is Why," "I Wanna Stay Home," and "Now She Knows She's Wrong") that earned the group a devoted yet decidedly cult following.

After the recording of Bellybutton, Roger Manning's brother Chris was asked to join the band as bassist for the imminent live dates.

After touring the Bellybutton album both Falkner and Chris Manning left the fold, the latter blaming a distaste for life on the road and the former unhappy with his role as just a guitar player. “I just kind of evaporated,” says Falkner. “I was told that Jellyfish would be an equal three-piece, with us writing and playing everything. That turned out to be a total joke. I felt like I was duped.”

Sturmer and Manning spent the next two years holed up in the studio with a rotating cast of musicians which included bassist Tim Smith and multi-instrumentalist/producer Jon Brion to record Jellyfish's sophomore effort, Spilt Milk.

Released in 1993, Spilt Milk, the band’s second and final album was a blustery, meticulous tribute to the hook-crazed nostalgia of ’70s fandom, mining inspiration from The Beach Boys ("Hush," "Ghost at Number One"), the guitar-heavy onslaught of The Kiss and Queen ("Joining a Fan Club," "All is Forgiven"), and the psychedelic pop of Harry Nilsson and Beatles ("Bye, Bye, Bye," "Brighter Day") with impressive acuity. A tour followed featuring Eric Dover on guitar and backing vocal duties.

While Spilt Milk confirmed Jellyfish’s immortality in the eyes of power-pop fetishists, it failed to capitalize on Bellybutton’s modest commercial success. This, along with increasing creative differences between Sturmer and Manning, was enough to send band members scrambling for the exits and resulted in Jellyfish's break-up in 1994.

“We made no money with the first album, and financial pressure was looming over us,” said Roger Manning of the issues leading up to Jellyfish’s dissolution. Compounding the monetary woes was Andy Sturmer’s autocratic hold on the group. “Now I can look back on it and see that without wisdom, maturity and maybe some counselling and therapy, we could’ve never worked through our problems,” says Manning. “Had there been more money coming in, it would’ve justified some of the pain.”

As the years have passed, Jellyfish’s army of longtime fans still dream of a reunion. On that subject, Manning isn’t optimistic. “Except for Andy, we all speak to one another,” he said. “Some of us make music together. But nobody is interested in working with Andy in a personal or creative capacity. It would serve no purpose, but I don’t say that with any animosity or sadness.”
Sites:
zenandjuice.com, omnivorerecordings.com
Members:
Andy Sturmer, Chris Manning, Eric Dover, Jason Falkner, Roger Joseph Manning Jr., Tim Smith (5)
Variations:
Viewing All | Jellyfish (2)
Jelly Fish, Jerryfish, ジェリーフィッシュ