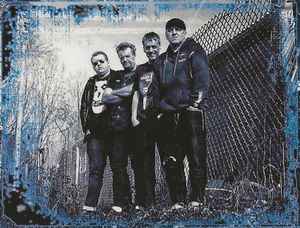 1984–1991
Foreign Legion formed in 1984 from the ashes of a band called Society, later Dead On Arrival. Dead on Arrival had one song on 1984's Bullsheep Detector album. Following the name change to Foreign Legion (due partly to people shortening it to DOA, which could cause confusion with the Canadian band of that name) and a number of line up changes (drummers in particular) the band released their first EP in 1986, on their own Rent a Racket label with the line up of Marcus Howells on vocals, Lyn Murphy on guitar, Helen James on bass and Paul (Marshon) Marsh on drums. Following further line up changes with Andrew Heggie on guitar the band played their first gigs outside the UK, with gig exchanges with Burning Ambitions from Le Havre and supporting Bérurier Noir.

Surf City their second EP was released in 1989 and their first full-length album entitled Welcome to Fort Zinderneuf was released later that year, by which time a new, more stable line up had evolved with Mark (Jolly) Williams joining on bass (from local band Blind Justice, who Andrew Heggie soon joined), together with Peter Giles on guitar and Ben Stansfield on drums, retaining only Marcus Howells on vocals.

During the 1980s the band played regular slots in the famous 100 Club and supported the likes of UK Subs, The Vibrators, The Partisans, Picture Frame Seduction, The Adicts, Major Accident, Toy Dolls, Angelic Upstarts, 999, Broken Bones and others. They also supported The Alarm, Joe Strummer & the Latino Rockabilly War and the UK Subs when they visited the band's home town of Merthyr Tydfil.

2000–present
Foreign Legion reformed in 2000, with members from before the 1991 split; Marcus Howells on vocals, Mark (Jolly) Williams on guitar, Andrew Heggie on bass and Ben Stansfield on drums. They released a split album with Major Accident called Cry of the Legion, before their next full-length album What Goes Around, Comes Around, produced by Mick Jones of The Clash. During the early 2000s the band released EPs and played in mainland Europe and USA with the Dropkick Murphys, Major Accident, The Templars, NY Relics and the UK Subs, including a show at New Yorks CBGBs. In 2007 the album Death Valley was recorded, featuring more new material as well as a re-worked version of Message From Nowhere from the first EP. The band recorded an unreleased EP in 2008, re-recording songs written by Mark (Jolly) Williams. This was the only recording to feature Jarrad (Noir) Owens on bass and Paul Black on drums. This recording later appeared bootlegged and with an incorrect lineup credited. Following an appearance at the Legendary TJs in Newport later in 2008, supporting the Anti-Nowhere League, guitarist Williams posted a statement on the band's Myspace account announcing his departure; Black and Owens soon followed. Members of local Caerphilly punk covers band Doc Savage joined Howells in Foreign Legion for a short while before a new line up emerged with the drummer from 1980s Cwmbran punk band Impact (who also featured on the 1984 Bullsheep Detector album) Glyn (Sid Lovely) Benton, together with Simon Bendon on guitar and Canis Humanus on bass. The band were now back on the road with gigs including the Rebellion festival alongside bands including PiL, Rancid, Buzzcocks and Social Distortion, together with a new split 12 track CD album with US band Sledgeback. A split EP with German band Riot Company followed in 2011, with a further split EP released in 2012 with Italian band Cervelli Stanki.