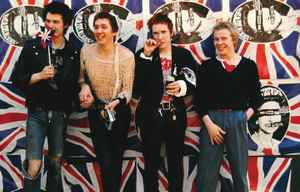 Profile:
The most famous (and infamous) band of the late 70s British punk scene. Their rebellious image combined with a commercial sound (partly thanks to producer Chris Thomas) created some of the most memorable moments of the 70s - both musical and otherwise. Line-up: Johnny Rotten (John Lydon, b. January 31, 1956 - vocals), Steve Jones (b. September 3, 1955 - guitar), Glen Matlock (b. August 27, 1956 - bass) and Paul Cook (b. July 20, 1956 - drums). In February 1977, Matlock was replaced by Sid Vicious (John Ritchie aka John Beverley, b. May 10, 1957). The band effectively split up after their 1978 US tour, although Jones and Cook continued to record under the name for another year or so.

The original line-up reformed in 1996 for a series of concert tours, and has played live shows off and on since then, and released live recordings.

May 16, 2022
Yes..crazy money when there’s been a silver vinyl bootleg 7” around for many many years…some people have more money than sense as the person that’s selling it to them paid £30 at recordstore.com
Reply Notify me Helpful

The GSTQ 7" Silver Vinyl reissue (for this years Jubilee) is out later this month is selling for up to £500 on eBay. I know it's Limited to 1,977 copies but why is it selling for so much? John Lydon approves of this release as he says it's 'appropriate' to re-release it. He is not so complimentary about other reissues coming out this year and the Disney Franchise biopic also due for release this year.

December 5, 2021
I was 17 (with long hair and a hard rock fan) until I heard Pretty Vacant on tv in '77 and that was it for me, short hair and punk attire! Loved the Pistols and numerous other punk/then New Wave bands. Lydon was unique in his vocal styling and had the attitude to go with what was happening in Britain at that time. It was definitely a kickstart to form many, many bands and political awareness raised. I had a fantastic time and loved the era, despite the shit conditions in the UK at the time!
Reply Notify me Helpful

A band that stemmed from two other band ideas (The Strand and The Swankers), ended up becoming one of the most infamous and even controversial bands in the history of punk.

Personally, I think people have a massive bias against the band, mainly because they focus more on Sid and John, instead of Steve and Paul. Russ Meyer (the original director for the cancelled film "Who Killed Bambi?") even stated that Steve and Paul "were very intelligent, level-headed guys", while Sid and John were "absolutely nuts. Both had an intense hatred for McLaren. They would call me [Meyer] up at two in the morning to say unspeakable horrors about him."

if I'm going to be honest, I think people focus on John and Sid too much. When in actuality, they could be focusing on Steve, Paul and even Glen Matlock.
Reply  See 2 replies Notify me 1 Helpful

August 2, 2021
Let's get 1 thing straight. There were other punk band's before the Pistols and some a lot better musically. But the Sex Pistols were the band that alerted ever kid that punk was a thing. Without them the punk scene probably would have stayed a niche London scene and fizzled out quickly. So say what you like, hate how much you want. The boy band they were manufactured by Talcy Malcy Kickstarted something big.
Reply  See 3 replies Notify me 1 Helpful

March 13, 2021
Is there a release of the Sex Pistols published (album, compilation etc...) where EVERY of their songs is included???
I was looking through wikipedia first, that was frustrating and I see here so many albums/compilations... I don't wanna waste my time.
So if anybody knows something, please let me know :-)
Cheers
Reply  See 1 reply Notify me Helpful

November 8, 2020
When it came to expressing their frustrations through their music and style, most other punk bands were a thumbs down but the Sex Pistols were a middle finger. The passion is why people came then and still come now.
Reply Notify me Helpful

several unconnected individuals i talked to claimed to own a Friggin' In The Riggin Picture disc with a boat picture, it couldn't have been pressed any later than the mid 90's as thats when i first had this conversation.
has anyone else come across this?

also those wierd Thai 7"'s and the bootleg reissues of them need to be added but i don't have the information to do it myself
http://www.philjens.plus.com/pistols/pistols/counterfeit_miscellaneous_thai.htm

May 21, 2018
The Clash, The Damned, Stiff Little Fingers, 999 and The Stranglers were all streets ahead of the Sex Pistols, both musically and politically.
Essentially, the Sex Pistols were rubbish... right time, right place, but essentially crap.
Never Mind has a couple of decent tracks, but that is about it.
It was a Swindle.
Ever get the feeling that You've been cheated?
Reply  See 12 replies Notify me 4 Helpful