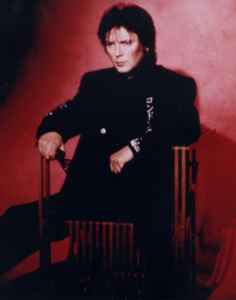 He first learned as producer in the German schlager style under the name of Tess Teiges, met Jimi Hendrix (1967), made demo tapes with Giorgio Moroder and produced different international productions with Claudia Field & Red Face from the mid '70s before having his first hit "Slice Me Nice" as Fancy in 1984.

June 20, 2019
Eccentric and generous Manfred Segieth aka Fancy has an almost insipid sleazy, sometimes lovely, vibe (probably due to his Schlager music background) on many of his releases, yet he was a year or two ahead of the dance game with his Teutonic Hi-NRG Synth-pop mistura for which he had the secret and appears to have inspired the likes of Bobby Orlando, Frankie Goes To Hollywood, The Pet Shop Boys and a few other bands I wouldn't dare naming for fear of fanatic's reprisals. Great music for driving with no destination under an e-deep blue sky.

May 13, 2016
All hail Fancy. The original Disco King. Master of disguise, lover of cowbell, lover of everything oriental. If you want a sneak peak of Fancy's superpowers, check out Scotch - Pictures (Tess Power Mix), The Hurricanes - Only One Night, PSB - One More Chance (Hurricane Mix) and Fancy's own debut album. We love you Fancy!
See 2 replies