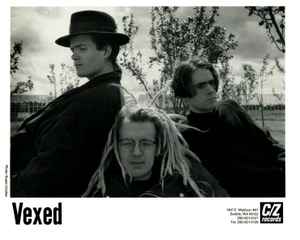 Profile:
Vexed was a Seattle band formed in '84 from the ashes of Death of Marat, and The Drills; the founding members were Milton Garrison (guitar) and Alfred Butler (bass). They played an unique style - a mix between post punk, funk, art and death rock; nothing whatsoever to do with the sludgy, grungy sounds of the Northwest.

The band made its debut in '85 with the song "Six Foot Hole" on the "Pyrrhic Victory: A Goal Attained At Too Great a Cost" compilation cassette along with Soundgarden, Skin Yard, 10 Minute Warning, Feedback, Mental Mannequin, The Fags, Colour Twigs, The Probes and The Horrible Truth. Next, the band appeared on the "Bands That Will Make Money" compilation in '86, and they were featured on two more compilations before releasing their own material: "Lowlife" compilation in 1987, and "Secretions" in 1988. Finally the band’s first non-compilation debut was "Maybe" 7'' EP in '88. The EP was eventually included on CD version of "The Good Fight" LP, released in 1990. In 1990 the band also made contribution to the famous C/Z compilation "Teriyaki Asthma" with the song GWYM (Go West Young Man) on vol.4.