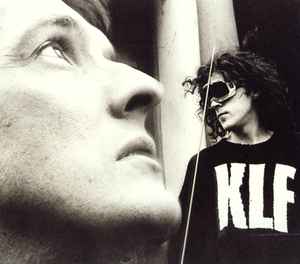 Profile:
Duo comprised of Jimmy Cauty and Bill Drummond. Cauty was born in Devon, England; Drummond was born in South Africa but grew up in the Dumfries & Galloway area of Scotland.

KLF adopted the philosophy espoused by esoteric novel series The Illuminatus! Trilogy, gaining notoriety for various anarchic situationist manifestations, including the defacement of billboard adverts, the posting of prominent cryptic advertisements in NME magazine and the mainstream press, and highly distinctive and unusual performances on Top of the Pops. Their most notorious performance was a collaboration with Extreme Noise Terror at the February 1992 BRIT Awards, where they fired machine gun blanks into the audience and dumped a dead sheep at the aftershow party. This performance announced The KLF's departure from the music business, and in May 1992 the duo deleted their entire back catalogue.

With The KLF's profits, Drummond and Cauty established the K Foundation and sought to subvert the art world, staging an alternative art award for the worst artist of the year and burning one million pounds sterling. Although Drummond and Cauty remained true to their word of May 1992—the KLF Communications catalogue remains deleted in the UK—they have released a small number of new tracks since then, as the K Foundation, The One World Orchestra and most recently, in 1997, as 2K.

The KLF catalogue remained absent from digital platforms until January 1, 2021, when an 8-track compilation of their 7" hit singles 1988-1991 - Solid State Logik 1 was released on streaming platforms, marking the 1st installment of a series called Samplecity Thru Trancentral.

Klf/Jams/Klf communications/K2 Official releases 1986 to 1992.
Unofficial releases 1993 onwards. A tiny few others that are usually free downloads of old alternate or unpublished versions of music- have been issued by Jimi Cauty and Gimpo via their websites. All other remixes are unofficial, not authorised or given permission or consent by Bill or Jimmy and as such are of varying degrees of great to ok in quality. It's obviously up to you to decide if to buy these however. My own personal choice is to only own official material by the band.

The bit of the biography everyone seems to miss out....
Bill Drummond was an ex manager of several band's including Echo and the bunnymen and Julian Cope. He was in a band too The Korovas as well as trying his hand at a solo lp (The Man.)
Jimmy Cauty was a session musician, studio engineer and production helper for Stock, Aitken and Watermen. He was in the band Brilliant on the PWL label that scored 1 hit single.
The 2 met each other, discussed the early hits by Bomb the bass, Marrs etc that used samplers as well as being inspired by a ch4 article on the use of sampling in music which at that time was a very new thing.
The first single by them in 1987 quickly ran into trouble for samples not cleared. Despite the fact a lot of people think they were a hit factory they had a lot of misses too. Kylie said to Jason was an intended hit that flopped massively.
The rumours of the million quid burning... they sold the ashes to be displayed at a gallery, they sold the filming of the burning to ch4.... they NEVER lost a million quid. The initial intention which succeeded was to show you can't lose money if you burn it and do it right by selling the rights to watch it. Unfortunately public and press backlash was massive and contributed to their decision to end the career. But also they knew that keeping having hits would be impossible so that was a massive part of it as well as Bill and Jimi were getting bored by that point.
The band were a massive part of a point on time. A major influence on dance music.

January 31, 2019
I thank them from the depths of my soul for their music.i appreciated their disdain for popular music aswell,but I have to say,even at the tender age of 12 I didn't think burning £1 million was justifiable on any level.
That money could literally have saved lives,and they must have thought about this themselves.does this mean they chose notorioty over human life?
Reply  See 4 replies Notify me 4 Helpful

January 13, 2017
The Liverpool-based, Dadaist Punk-inspired career of the KLF (Kopyright Liberation Front) has been built upon a succession of industry pranks throughout the sample-heavy Acid House movement of the late 1980s and early '90s. Essentially the duo of Bill Drummond and Jimi Cauty, the group began as the Justified Ancients of Mu-Mu (JAMS); later, a one-off stint as the Timelords resulted in a minor hit with "Doctorin' the Tardis."
Never ones to hide their contempt for the music industry, at the point they struck fortune in England with the soulful hits "3 A.M. Eternal" and "What Time Is Love?," they refused to play the songs straight, instead asking Grindcore favorites Extreme Noise Terror to be the backing band. In addition to spraying crowds with faux machine-gun bullets and reportedly dumping a sheep's carcass in a hotel lobby, the band has also written a manual on how to write pop songs. They have since refused to release any more music until world peace has arrived.
Reply Notify me 7 Helpful

March 11, 2013
R.I.P. Ricardo Da Force, a massive inspirational force in these most unusually inspired records. Make mine a 99 in Valhalla, mister, and thanks :)

Bill Drummond and Jimmy Cauty were the finest artists of the latter half of the 20th century. Not just musicians, Artists. Music can't contain the scope of what they accomplished in this world.

January 16, 2009
The KLF was an incredible project that has a big place in the electronic music history. They are (along with The Orb, ask Cauty) the fathers of the atmospheric house or something like trance-dub; a kind of music that explore slow beats in combination with more soulful and rhythmic elements, voices and another samples.

Everything start in the end of the nighties, listening to KLF and his first works is listening the exact moment when the 80's music was ending (they release great 80's pop hits!) and finally moves to the sounds of electronic music and spread all over the world in the starting of 90's. Somebody have listened "Kylie Said to Jason", is pure synthpop nostalgia flirting with few acid dust!

"The White Room" is a great album that confirm their goodbye to the 80's and smile to different sounds. They still have that synths, melodic sounds and sweet voices, but also has one feet in the danceable hand. Like the song says "We climbed to touch the stars".

KLF was some of the firsts electronic music artist (continues to the Brian Eno legacy) that was interesting not only in the dance side, but in the calm side."Chill Out" is one of the greatest albums not only in the ambient history, but in the all electronic music history. Is another kind of goodbye to the 80's music (check all the samples), while the group travel along US in an atmospherical higway and say hello to the deeper sound and samples of the next decade.

Also they developed an particular sound that create the basis of the acid house, rave and 90's trance. "What Time Is Love": the real trance sounds that was deep, serious and hypnotic!; before the genre was distort by others and becomes so light and boring.

Thanks for the all your hard work KLF.
Reply Notify me 4 Helpful

The KLF are highly influencial on mid-90's Pop, Hip Hop, Trance, Electronica, House, and Dance movements. As other writers will tell you, the KLF made their mark with huge acts of tom-foolery, but the legacy Jimmy Cauty and Bill Drummond have left us only wanting more. The KLF are associated with lifted samples, but the more curious point is that the KLF themselves were sampled for numerous hits and boundry-breaking music in the dance arena.

The critically acclaimed "The White Room" was more an assemblage of hits after the fact, and included humerous compositions mixed with serious messages. Almost Mozart for techno, the harmonies are original, even if the samples are not.

Cauty and Drummond authored a book called "The Manual (How to have a number one the easy way)", being more of a diary into their lives as the KLF, it uses a non-audio engineer vocabulary, and is a fun read from cover to cover (157 Pages).

I personally have many memories that include the KLF, and I will never tire of the "hits" 3AM Eternal, What Time Is Love, or Last Train to Transcentral. The mystery of who the KLF is was part of the fun when it was all going on. I can only hope for more works of this caliber in the future.