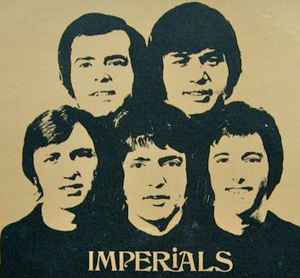 Profile:
This Gospel Music Hall of Fame group was founded in 1964 as Southern gospel quartet Jake Hess & The Imperials. Hess' aggregation was intended by Hess to be a "supergroup" of sorts gathering members of Weatherford Quartet, the Oak Ridge Boys and The Speer Family. The Imperials have had a rotating roster and sound over the years beginning to slowly morph into CCM beginning with The Imperials* - New Dimensions.

The group established a relationship with Elvis Presley in 1966 as studio singers. In 1968, they became backing vocalists for Jimmy Dean and did the same for Presley the following year working for both concurrently for a time. The band ended the deal with Presley first after 1971. They set a first for Christian music when they integrated the group by adding Sherman Andrus in February of 1972. That same year, they stopped backing Dean and from that point focused exclusively on work in the gospel music industry. They would go on to win four Grammys and 15 Dove Awards over their long career.

The previously all-male group added its first female in 1991 when Armond's sister Pam Morales took the place of the departing Jason Beddoe during the recording of Imperials - Big God. She would remain with the band through 1993. 1998 saw the five original members (Hess, Morales, Nielsen, McSpadden and Slaughter) onhand to accept their Hall of Fame induction alongside later members Blackwood, Andrus, Moscheo, Murray, and Taff.

In September 2004, Armond Morales transferred ownership of the name "The Imperials" to the lineup at the time: son Jason Morales, Jeremie Hudson, Ian Owens and Shannon Smith. This version of the group released two albums on Lamon Records, Imperials - The Imperials and Imperials - Back To The Roots, consisting of re-recordings of older Imperials tunes. That incarnation of the band split up in early 2010.