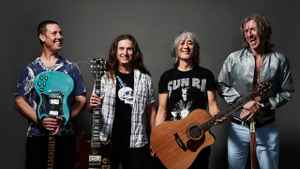 Profile:
The Hard-Ons are a melodic punk rock band from Sydney, Australia who officially formed in 1982. They are often acknowledged as Australia's most commercially successful independent band and have found international success since the release of their debut Surfin On My Face EP in 1985 (later re-released in 1987 on Australia's Waterfront Records).
The band's origins can be traced back to Western Sydney's Punchbowl Boys High School, where all three original band members were students. The multicultural trio of Keish De Silva (of Sri Lankan descent), Blackie (Yugoslavian heritage) and Ray Ahn (Korean ancestry) were initially too young to play gigs in pubs, but honed their skills playing at parties, school dances and the famous Sydney "all ages shows" of the era.
Largely influenced by punk, metal and psychedelic bands, the Hard-Ons sound is hard to categorise, though their love of the independent punk spirit (with the members deliberately controlling their own careers: recording, booking and promoting themselves, creating their own artwork (Ray), choosing support bands and even managing the merchandise desk whilst on tour) has found the trio never short of fans (Henry Rollins being one 'celebrity' who is never short of a good word to say about them). These unconventional decisions, combined with first class songwriting talents, powerful live performances and a healthy sense of humour earned the band a large following in Europe as well as their native Australia.
In March 2016 former drummer & vocalist Keish De Silva re-joined the Hard-Ons as a singer on a permanent basis (after having joined them on stage occasionally before).
In March 2021 read on Hard-Ons official facebook: "Keish is no longer a member of the Hard-Ons. The band will move on without him."
In August 2021 they announced Tim Rogers from You Am I as their new singer.
Sites:
Facebook, Bandcamp, YouTube
Members:
Jay Younie, Keish De Silva, Murray Ruse, Peter Black (4), Peter Kostic, Ray Ahn, Tim Rogers (2)
Variations:
Viewing All | Hard-Ons
H. Ons, Hard Ons, Hard-Ones, Hard-Ons!, Les Hard-Ons!, The Hard Ons, The Hard-Ons, The Hard-Ons!, 핟언즈