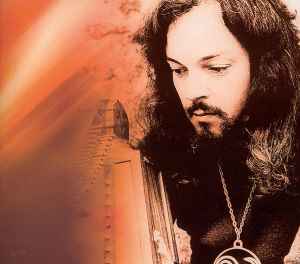 Real Name:
Alan Cochevelou
Profile:
Getting famous for popularizing the Celtic harp, it would be simplistic to make him just a harpist. This multi-instrumentalist of Breton descent was born January 6, 1944 in Riom, Auvergne, France.

While growing up in Paris, his father Jord Cochevelou dreams on reintroducing the Celtic harp (Telenn in Breton) in its cradle: Brittany. But it has to be reinvented as the instrument is long time lost, nobody plays it anymore. also he doesn't have a clue on how to make it. During the 2nd World War, Jord met with a harp teacher named J-M Hamonic who gave him some ideas on how to transpose drawings into a concrete instrument. 1942 saw the making of the first preliminary tests, but it was only a decade later that a true harp could be created. Alan, then an early teen attracted with science-fiction novels, mights and magic starts to play with this new instrument built by his father, getting introduced to harp by his teacher Denise Mégevand. He starts to play in Paris and Brittany. Age 9 on the 28th of November 1953, he plays at the Maison de Bretagne in Paris on his father's first protype. In 1954, he integrates the Scout Movement, as well as the Bagad Bleimor as a bombarde player. In 1955, he gets to perform as the opening act of Line Renaud at L'Olympia. He'll then seriously start on learning the Breton language, including mythology and history in order to reconnect with his roots. In 1959, he'll put on record the first ever Celtic harp song on label Mouëz-Breiz, followed with the infamous Telenn Geltiek (Harpe Celtique) (then still under his birth name; Alan Cochevelou). In 1961, he'll become "penn-soner" (lead) of the Bagad Bleimor. Together with his friend Youenn Sicard, he'll win several bombarde and biniou (Breton bagpipe) championships in Gourin, years 1966 1968 and 1969. Those years are constitutive of the the classical path followed by Stivell, but this modernist is already willing to find a new sound and will finally turn towards Rock music.

Thrilled with English Pop music and the US Folk wave, he gets to play with a brand new Celtic harp with metal strings (called bardic harp), again developed by his father. From 1966 onwards, he starts playing in Youth Clubs and various festival, such as the "Hootenannies" (some kind of jams sessions), organized by Lionel Rocheman in the American Centre of Paris where he sings for the first time. The years 1966 1967 are decisive for his following career. He gets to air on France-Inter (one of France's main radio back then and today still), and soon sings on with Philips. He'll then play several times at José Arthur's Pop-Club, and during this era, he'll change his scene name to Alan Stivell "a Breton name standing for origin", as he says.

His first LP Reflets is released in 1970, Alan already lauds cultural diversity and speaks of Ethno-Modern Music, cites East Of Eden (2) and Donovan as references for Celtic Pop Music, he's the first to talk about Breton Folk-Song. He sells 10000 copies of his LP before releasing Renaissance De La Harpe Celtique the following year, getting the Grand Prix of Académie Charles-Cros. In the following months, he becomes more and more oriented towards electric music and on the historical day of the 28th of February 1972, he performs at L'Olympia together with Dan Ar Braz, Michel Santangeli, Gabriel Yacoub, René Werneer... Meanwhile, the concert is retransmitted live on French radio Europe 1, about 1.4 million copies of À L'Olympia were sold!

As of 2014, Stivell have released more than 25 LPs and his music is still alive, it has transposed into what is today known as World Music. He played with various artists such as Kate Bush, The Pogues, Doudou N'Diaye Rose...
Regarding his political views on Brittany, Stivell doesn't militate for its independence but for autonomy (it could be directly linked to Europe).