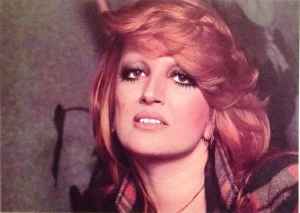 Real Name:
Mina Anna Mazzini
Profile:
Italian singer, born 25 March 1940 in Busto Arsizio. Mother of Massimiliano Pani and Benedetta Mazzini. She performed in Italian TV variety shows from 1959 to late 1970s. She has dominated the Italian charts over decades, scoring 70 singles. She has recorded over 1000 songs, 110 albums, sold 76 million records, and she is the only artist to land an album at the 1st position of the Italian chart in each decade since the 1960s. She gave up public appearances in 1978, but has continued to release albums on a yearly basis.
Sites:
minamazzini.com, MySpace, Wikipedia, Wikipedia, imdb.com
Aliases:
Baby Gate, Mina Mazzini, Pomodoro (2)
Variations:
Viewing All | Mina (3)
Lina, Los Marcellos Ferial, Mina, Мина, ミーナ

April 26, 2021
Mina is not only the QUEEN of Italian music, but the queen of music in general! She has a really impressive vocal range, is multilingual, and can sing in more languages than she speaks! I've listened to her before, but didn't become a full fledged fan of her til November 2016. And since then, I've been singing her songs a lot. I really enjoy singing her songs to the point where I dared to sing them at various events! So far, I sang one of her songs at my parents' wedding; as well as another one of her songs at a school talent show the same year; back when I was still in high school.
See 1 reply

May 15, 2018
With all the respect for the greatest singers of the greatest Italy, such as MILVA, IVA ZANICCHI, ORNELLA VANONI
(these names are intentionally written in capital letters). I bow before each of these singers. But still there is Mina.
There's Mina and everyone else

August 13, 2014
Mina (3) is the greatest pop singer of all time; she's from italy and most of the world don't know who she is; if she was born in uk or us my assertion would have been largely shared.
certainly i'm talkin' about the quality of Mina (3)'s voice, not of her music; to say a thing that could explain the question, the great aretha franklin is second to her and you can say the same with anybody. she can sings pop, rock, jazz, latin (i'm sure also lyric) remaining at the same maximum level in terms of timbre, intonation and originality of the interpretation. more than this surprises the extent of her vocal range during the '60s and the '70s. if you like female singer you can't ignore this artist!
See 2 replies