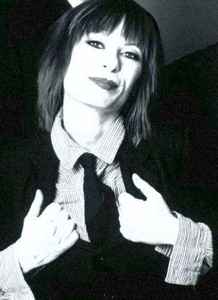 She was discovered singing at a bar by Peter Laughner and asked to join his current band at that time, Peter And The Wolves. The two became good friends (he even bought her first guitar) and they planned to move soon to New York City but Laughner died prematurely from complications due to acute pancreatitis before the move could happen. She said in a 2017 interview, "When Peter passed away, there was nothing left for me in Cleveland so I did what he and I had planned to do together – I moved to New York in 1977, and immediately dove into the No Wave scene."

Though she was untrained on the instrument, she was the original keyboardist in The Contortions, playing an instinctive rhythmic style on an Ace Tone organ with them before leaving after their 1st album, Buy. Around this time, while working as personal assistant to Brian Eno in 1978, Bertei took him to a series of concerts at Artists Space in New York, which resulted in Eno producing the landmark No New York LP. Musically she's primarily been known as a vocalist since that time and formed The Bloods circa 1980, an all-female band known as the first openly queer and "out of the closet" band.

Since then, she's had much success, including a few hits on the music charts. Her single "Build Me A Bridge", produced by Thomas Dolby, was a dance/disco hit in 1983. She also sang on producer John "Jellybean" Benitez's 1988 U.K. hit "Just A Mirage". "Little Lives, Big Love" was an adult contemporary hit from her 1988 debut solo album, Little Lives.

In addition to music, she's also been active in film and TV as well as being a published author.
Sites:
adelebertei.com, Facebook
In Groups:
Anubian Lights, Aural Exciters, The Bloods, The Contortions
Variations:
Viewing All | Adele Bertei
A. Bertei, A.B., A.Bertei, Adele Bertie, Adèle Bertei, Bertei