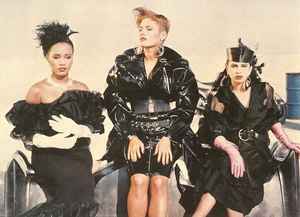 Profile:
Combining funk, soul, opera, jazz, fashion, and art may seem like an impossible task, but the cutting edge group, Madame X does just that and more with seamless finesse. Beginning in the late 1980’s, with members Iris Parker, Valerie Victoria, and Alisa Randolph, Madame X exploded on the scene in 1987 with their hit “Just That Type of Girl”, the first single released off their self titled album “Madame X”.
Their music was originally produced by Bernadette Copper from the all female group, Klymaxx. Additional collaborators include, John Bokowski and Cornelius Mimms, with much input given by engineer and record producer Gerry Brown. The first single “Just That Type of Girl had much critical acclaim winning the Most Innovative Song of the Year BMI Award. Madame X went on to record soundtrack songs featured the films Action Jackson” and “Fatal Beauty”.
Madame X has made national appearances and tours, Including several appearances as guest artists and presenters on The BET Awards, The Soul Train Awards and The American Music Awards. They also appeared on the television show SoulTrain, performing their hit song “Just That Type of Girl and “I’m Weak as well as performing live at the Apollo Theater on Show Time at The Apollo.
Sites:
Facebook
Members:
Alisa Randolph, Iris Parker, Valerie Victoria
Variations:
Viewing All | Madame X
Madam X

April 9, 2004
Madame X = Klymaxx
Klymaxx was one of 80's electro-funk's most sassy female group. Several top 40 hits.
When Klymax broke up Bernadette Cooper (Annie Yet Your Gun) formed Madame x(1987??) The group was awesome and every song was filled with attitude galore. Great dance tracks.....Just that Type of Girl, Flirt, I want Your Body, Madame X, and a really cool post modern slow jam,Cherries In the Snow.Unfortunately the fgroup fell apart due to poor management. Madame X, Madame X 1987 is a killer cd that is a rare find. Once in a while I see this album on Ebay selling for over $100.00. So if you find this cd, tape or album (black cover with Madame X written in red) enjoy it!