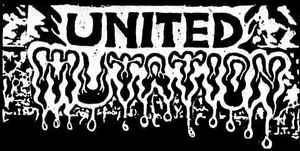 Profile:
United Mutation is a Punk/HC band formed in Northern Virginia out of the foundations of a bedroom garage band called Dark Self Image (also known as DSI - which was later used as the name of their label) and played their first gig as "UM Halloween" in 1982 with Media Disease.

A United Mutation s/t CD was released on Lost & Found Records. It features 30 tunes (1983-1991), including the (rather obscure) 'avantgarde' tracks the band did.